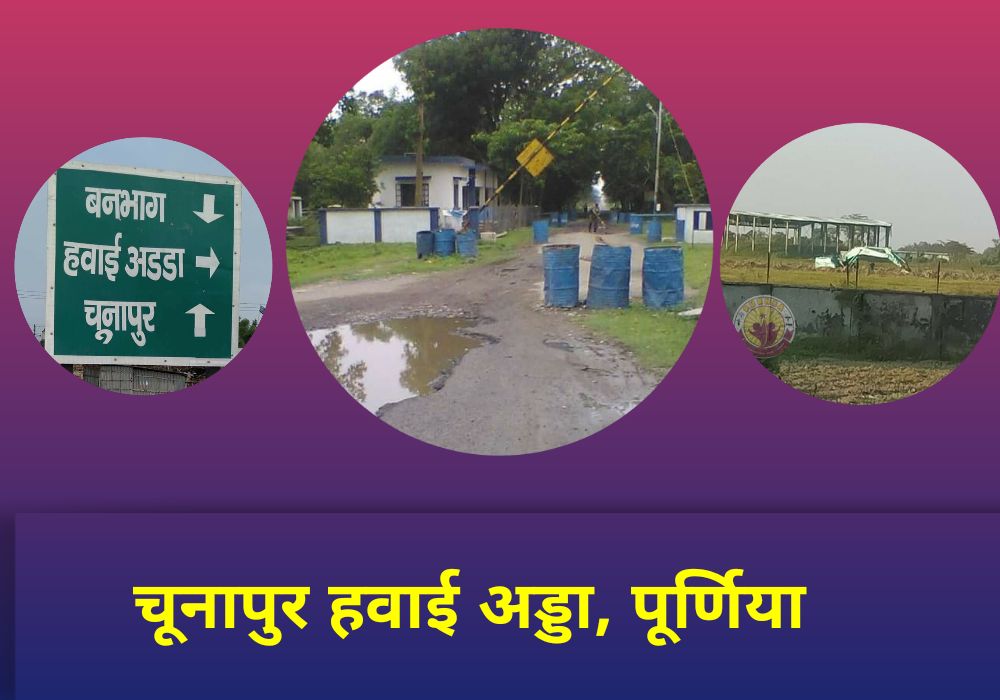 Purnea Airport (IATA : PUI, ICAO: VEPU), also called as Chunapur Airport Purnia. Purnea can be a wonderful place to visit, and with the purnea airport (पूर्णिया एयरपोर्ट) surfacing recently due announcement by both Central Government and Bihar State Government to develop a commercial airport in Purnia.

The first airplane took off in 1933 for the Mount Everest expedition from Purnia, after which the airport service started here from 1956. The airport has not been built till date in Purnia, the oldest district of the country, 252 years old.

For the first time in 1990, the then Union Minister Shri Mulayam Singh Yadav had said this. Bihar Chief Minister Shri Nitish Kumar had raised the issue of making Purnia International Airport in 2014 itself, later he also announced.

On 18 August 2015, Prime Minister Narendra Modi announced the restoration of flight service from Purnia airport. After that the residents of Purnia started feeling that within 3 years they would open the airport to the general public.

Where is the matter stuck

Why is there delay in land acquisition?

Under joint operation from Purnia Military Airport, 52.18 acres of land is to be acquired for Goasi on the requisition of Directorate of Civil Aviation, Patna for Civil Enclave and Link Road project.

This land will be acquired from 75 ryots. The occupancy of 17.89 acres of land from 30 ryots has already been sent to the Right Requisition Department. 7 ryots had also approached the High Court, which are pending.

There was a slack in the process of land acquisition due to the Corona period. Now it is likely to accelerate again.

16 acres of land another new demand

For the construction of a civil enclave and approach road for joint operations from Purnea Military Airport, the Airport Authority has placed a demand for another 16 acres of land in addition to 52 acres to the district administration.

Many MPs and ministers gave a memorandum to the Aviation Minister Jyotiraditya Scindia to start the airport early.

The campaign launched on Twitter to demand the opening of an airport in Purnia district of Bihar has received tremendous success and the support of thousands of people.

On 8 August 2021, Twitter #PurneaAirportLA was run on Twitter, about 80000 people tweeted and supported the early construction of Purnea Airport.

When will the airport start? No fixed date line has come yet. If the same question is asked to an administrative officer, then its direct answer is that the matter is still in the Patna High Court.

It is expected that as soon as the issue of land acquisition is resolved by the Patna High Court, the runway work can be completed. The work on the rest of the Purnea International Airport is going on very fast.

Bihar, once the principal seat of many imperial powers, is also known for its rich culture and tradition, as is business and commerce, which is now flourishing in the state. No more is Bihar a backward state with Patna, the capital city boasting about its heritage as well as modern trade practices.
To mention among the notable cities in Bihar, Purnea has recently drawn the attention of visitors from all over the country as it is fast growing into a smart city.
Door to Door Services Limited, based in Bangalore, in association with Spirit Air Private Limited started the non schedule purnea bihar airport flights, with 50 minutes time being taken to reach Patna. Currently this service not available due to construction work of largest airport in Bihar.

The chunapur purnea airport is maintained and operated by the Indian Air Force and has a runway made of concrete that is 2,652 m (8,700 ft) in length and situated 39 m (1129 ft) above sea level.

The orientation of the purnea airport purnea is 09/27 and with visitors frequenting this airport and having a world class experience in travelling to the airport in purnea bihar coming financial year, the purnea airport name has become prominent in India.

The airport in purnea first appeared in the air map of India way back in 2012 with the first flight carrying 9 passengers reached the airport from Chunapur Defence Airport, which is 10 Km from Patna divisional headquarters. The flight was operated by Spirit Air Private Limited.
Regarding ground transportation and parking, passengers get information about map and direction, rental cars. Rates and shuttle/taxi services.

In addition to the facilities being provided at the purnea airport, passengers will find the following services:

Nearby cities and towns

Cities nd towns nearby Purnea Airport are Purnia, Kasba, Banmankhi, Katihar, Bihariganj, Araria, Dalkola, Murliganj, Naugachhia, Manihari, Raghunathpur, Colgong, Sahibganj, Forbesganj, Chhatapur.
Tourist Spots in Purnea
The best of Purnea is reflected in the tourist spots that are near to the airport in purnea. Places to visit include city kali and shiv mandir, the shrines of Darghah of Hazarat Jamalul Haque Bandagi, Mata Puran Devi temple, Chimni Bazar, debri ruins of historical Garbanili, Darbar of Raja Kalanand Singh,Darga and Khanqua Alla Mustafia, and the old railway station.
Other tourist spots include:
Line Bazar – Near to the purnea bihar airport is the line bazar, where you will find many shopping outlets and there are more than 450 practicing doctors here.
Kaath Pool – The Kaath Pool is a wooden bridge on the Kaath Pool on the National Highway 31 which was built centuries ago.
Ganga-Darjeeling Road – The Ganga-Farjeeling road is worth exploring because of the places like Gulab Bagh. Tatma Toli, Flour Mill-Polytechnic Chowk.
Kamakhyaya Mandir – Situated at the border of Majra Bhabanipur, Rahua and Kalyanpur, this temple is built in resemblance of the original Kamakhyaya Temple, and is visited by large numbers of devotees throughout the year.
Climate
Incessant rain is there during the monsoon but during the winter and summer, the temperature does not reach the extremities. Purnea is a place to visit round the year except during the monsoon.
Where to stay in Purnea

Coming outside of the purnea airport purnea, you will find many modes of transport to take you to some good places to stay that include star facility hotel and guest houses.

There are hotels offering a luxurious stay and unmatched hospitality. You can get a pre booked car rental from any hotel from the chunapur purnea airport.

You will find ample options for shopping that include the Bhatta Bazar, where you will find local items at bargain prices.

To reach the city of Purnea, the best way is to travel by air to the purnea airport purnea, from where you can take a taxi or a shuttle. Reviews by passengers who had travelled by the Spirit Air Private Limited proves the quality of travel and exceptional facilities at the chunapur airport purnea.

All are welcome to travel to Purnea by air to have an exceptional experience that few airlines can offer.